Established in April 2007, the Drill Hall Arts Café provides training opportunities to young people. The project offers a route into training for those who have not been motivated or had the experience to take up standard catering employment.  It provides an accessible and supportive route into work for young people who are not ready for the mainstream job market due to lack of qualifications and other circumstances, and whom other employers were unlikely to employ.

The training encourages the gaining of skills, confidence and experience to enter employment or further education.

If you or someone you know would be interested in getting involved then please contact Stephanie on 0131 555 7100 or fill in our volunteer application form. 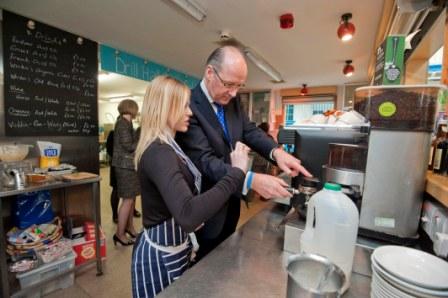 Tell us a little bit about yourself… (e.g. where are you from, how old are you, when did you leave school…)?  I’m 19 years old, from West Pilton, I left school almost 3 years ago

How did you get involved in the café training scheme?  I was claiming Job Seekers for 6 months then was offered a Community Jobs Funded Placement. I went for an interview at Out of the Blue.

What did you do on your placement?  I was a cafe assistant which involved dealing with customers, taking/making orders, cleaning up afterwards and so on.

What was the outcome of your placement?  I was offered a permanent job.

Any other things you want to say about the placement, the Café or the Drill Hall…?  This Placement has helped me with many things mostly my confidence in dealing with people whether it be face to face or over the phone.

What’s your favourite thing on the café menu?  Too many lovely things to choose from it’s difficult to choose a favourite! 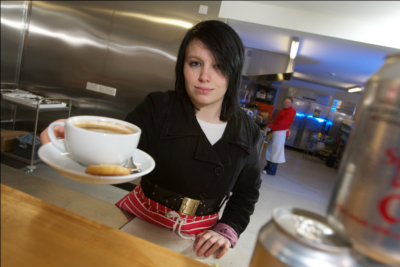 What’s the best thing about the café?  A chance to meet new people and be in a new environment. It’s good that we have exhibitions on and all the different things going on here.

What’s not so good?  Nothing. The worst part of it is probably that I’ll be having to leave at the end of the six months…!

Is the placement what you expected?  No, it’s different. It’s better! I thought it would be just like a normal café – but here you get all the studios and artists and exhibitions and all…

What did you do before coming onto the placement?  I left school last Christmas. I’ve been going to the air cadets and doing some volunteering and then just waiting for the café to open again after the build so I could start…

What are your future plans?  Join the RAF as a caterer / air hostess.

What’s your favourite food from the café?  I don’t know. It’s good to try different things – like I had never tried cheese chowder before. The rule is if you make something you have to try it – I think that’s a good thing. There’s not a lot I wouldn’t try…!

Isi, Tammy’s supervisor says: “Tammy is 16 and she started her placement beginning of March this year and is due to finish in September. She’s been an absolute *star* trainee so far – really hard working and very sociable. She’s not shy talking to people in the building and knows a lot of artists and the trades people working on the build project by name, which is unusual for trainees her age. We hope we can teach her a lot of things she can use in her future career – and life in general!” 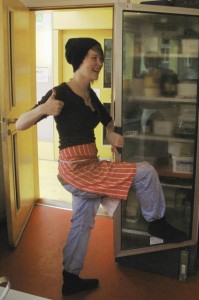 After four months as a trainee at the Drill Hall Café, 18-year old Meredith O’Donoghue has landed a job as a commis chef at the Balmoral Hotel.  Meredith was on the café training programme which is run jointly by Out of the Blue and the Port of Leith Housing Association. She applied for the Balmoral Hotel job, and after one telephone call and a face-to-face interview Meredith started the following week. An assistant chef said to her ‘you must have really impressed them to get the job so quickly!’.

Six weeks into the new job and Meredith is beaming with pride and buzzing from the excitement of her new role. But it’s no walk in the park. “I’m supposed to work 39 hours with two days off a week, but it’s always more than that. Sometimes when there’s a function on we work 14 hour shifts”.  So far Meredith has worked in the main kitchen and the pastry kitchen, as well as assisting with the hotel breakfasts which means a 4:30am start!  (We thought 8:00 in the morning at the Drill Hall Café was early…). “We wear the whole outfit – tall hat and the chef jacket with all the buttons and checked pattern.”

The experience so far has made Meredith even more determined to become a chef. Alongside her traineeship, she will also be sent to college to study subjects such as food hygiene.

What’s the best thing you have made so far? “The other day I had to make a macadamia pie, it was really yummy!”

Meredith has always liked cooking and was keen to try out new things whilst working at the Drill Hall Café. Perhaps we can claim a little bit of Meredith’s success too – in any case we’re extremely proud of her! Other café trainees have gone on to further studies or training in areas such as care work. 17-year old ex-trainee Jodie Boswell was taken on as a full-time café staff member after her placement because she excelled in her role and showed a great level of commitment. Out of the Blue is always working hard on improving the scheme – let’s hope for many more success stories in the future! 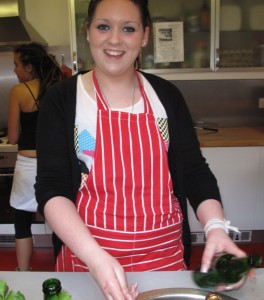 Jodie, who is from Leith, has just completed a 6 month café traineeship at the Drill Hall Arts Café. Jodie first came to the Drill Hall as a participant in the ‘Streetlife’ project. Through this project out of the blue worked with teenagers who used the Dalmeny Street Park as a hangout and were seen by some older members of the community as a threat.  A photographer worked with the group to produce images of the park and a youth worker and designer based in a studio at the Out of the Blue Drill Hall helped them produce a magazine with their writing, graphics and photographs. The magazine was launched at an event at the Drill Hall featuring an exhibition and an audio/visual projection of their work. We asked Jodie a few questions about her experiences so far.

Do you enjoy it? It has been amazing. I’m getting up in the morning all excited about coming to my work. I have never worked before and didn’t know what to expect but working in the café is a great experience.

What have you learned or what have you got out of your time here? I have learned how to make fancy coffees, to cook, deal with customers, use the till and work in a team.

What do you think it will be like over the festival? Very busy with all the fringe crowds! It’ll be exciting to see the shows.

Would you like to stay in Leith in the future? Absolutely.

What’s your favourite thing on the menu? Would have to be the tomato and lentil soup!

Back to Top ↑
This site uses cookies. By continuing to use this site, you consent to the use of cookies.OKLearn more