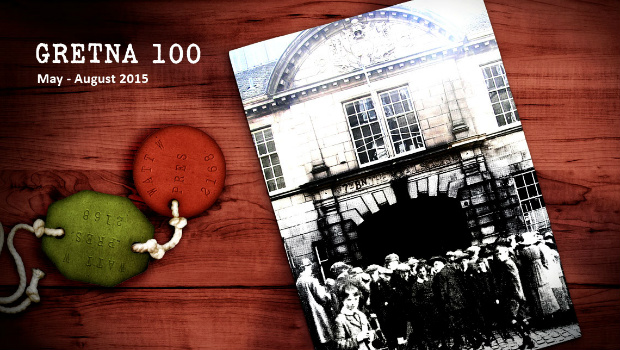 On the 22nd May 1915, at Quintinshill near Gretna, the worst train disaster in British railway history left over 200 men from the 1/7th Royal Scots dead. This ‘Leith Battalion’ trained at the Drill Hall on Dalmeny Street which later became the focus point for families looking for information after the disaster.

Working with Out of the Blue in this same building 100 years later, a group of community actors from Active Inquiry and Strange Town Young Company researched and devised a piece of promenade theatre, Persevere, which guided the audience around the Drill Hall enabling them to catch glimpses of stories of Leithers 100 years ago saying goodbye to sons and brothers, hearing the news of the crash and coping with the aftermath.

In addition, a group of community researchers worked with Citizen Curator and artist Jan-Bee Brown to research and curate an exhibition, Seven of the 7th, exploring the disaster through the story of seven soldiers who were involved. This exhibition also included The Tree of Life, produced in partnership with Pilmeny Youth Centre and artist Heather Scott, in which pupils from Leith Academy researched and helped to make a glass dog-tag for each of the 216 soldiers who died.

Out of the Blue Drill Hall based film maker Ray Bird’s brilliant documentary film of the Gretna 100 project  powerfully illustrates how a participatory arts project can have a long lasting impact for participants and audience alike.

Click on the titles below to learn more about the project. 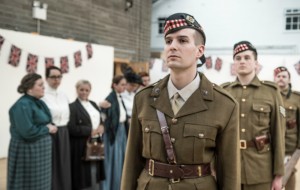 Playwright Duncan Kidd worked with Active Inquiry and Strange Town theatre groups using archival research from the Gretna 100 research group as the basis for his script.

Performances of Persevere took place at the Out of the Blue Drill Hall in May 2015 with sold-out dates during Leith Festival and Forest Fringe in 2015. 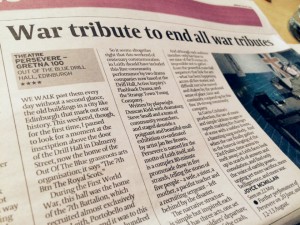 “difficult not to be moved and shaken by the profound sense of place, time and continuity conjured up by this fine 24-strong community company”
– Joyce McMillan- The Scotsman – ‘Persevere’ review 5th June 2015

“It was a great experience to be part of a project which engaged with the history of our local area, whilst simultaneously engaging with the community that lives here now”
– Gretna 100 participant

‘Seven of the 7th’ exhibition

The Seven of the 7th exhibition, curated by artist Jan Bee Brown and Citizen Curator in collaboration with the Gretna 100 research group, ran from 22nd May until 13th August 2015. Excerpts from filmmaker Ray Bird’s Gretna 100 documentary were also shown as part of the exhibition.

Seven of the 7th feature by Phyllis Stephen of The Edinburgh Reporter.

The Gretna 100 research group played a vital part in the project, collecting images, memories, stories and objects related to the disaster which then became the starting point for the theatre production and exhibition.

Gretna 100 research group member and descendant of one of the crash survivors Heather Thomson investigates how the sacrifice of the 1/7th Battalion of the Royal Scots is being remembered.

Images from the time period

Due to the high volume of documents sourced by our research group, not all are uploaded to the website. If you wish to view this research, please contact us.

If you would like further information about the Gretna 100 project, please email marketing@outoftheblue.org.uk