Our Place in History

Out of the Blue has grown to become a significant provider of studio and creative space in Edinburgh. 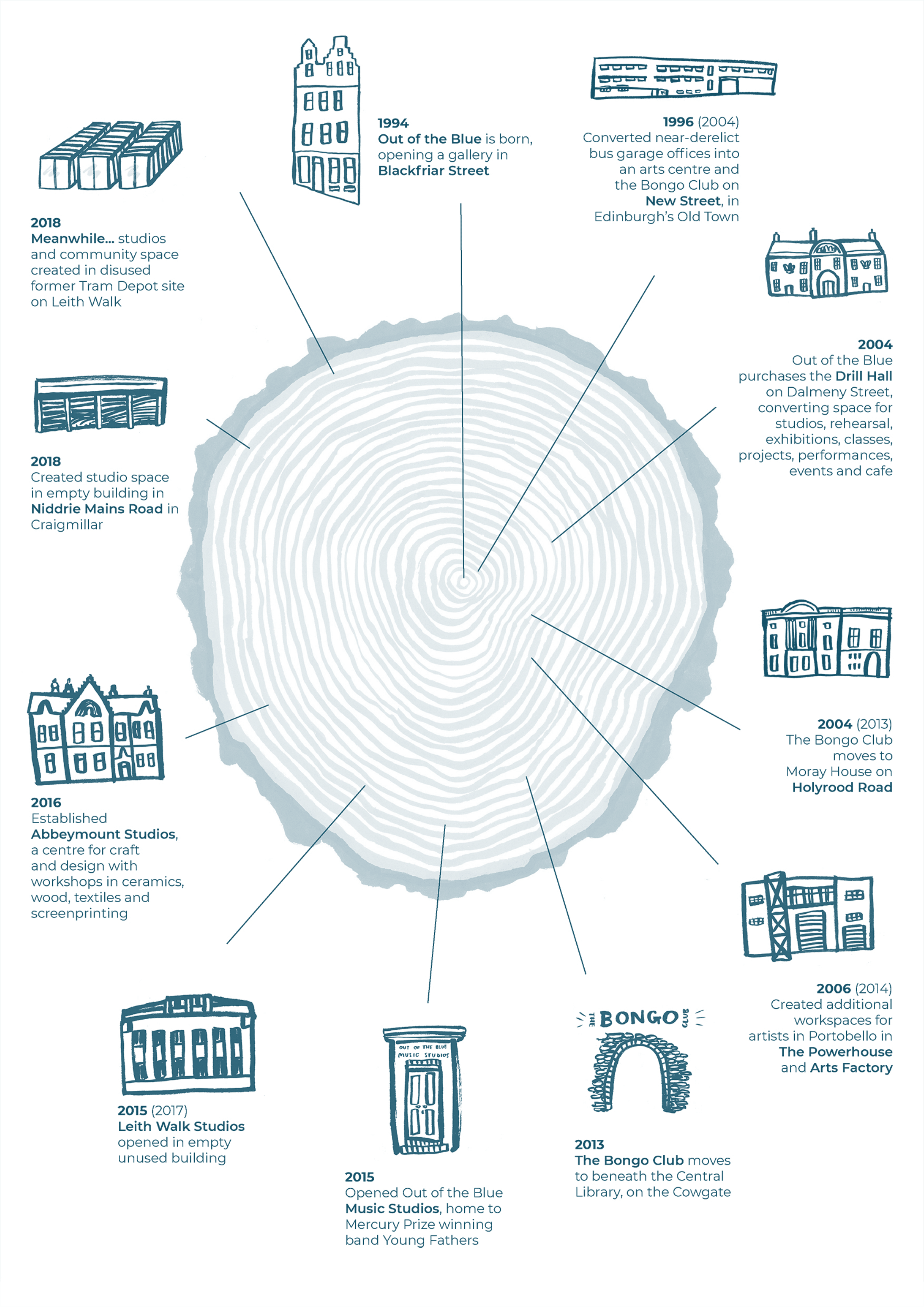 Out of the Blue (OOTB) has been a hothouse of creativity since birth; born in a small shop in Edinburgh’s Old Town, back in 1994, when to find creative space in Edinburgh was a massive challenge. Created by young people who saw what was possible in the cities of mainland Europe and returned home to a commercially rich, creatively poor city.

Taking over ex­bus­garage­offices (awaiting demolition in New Street), they carved out some creative space and, in 1996, The Bongo Club was born there. Over 6 years, thousands of people joined in for studio space, classes, workshops, live music, theatre, projects, clubs, extraordinary events and all the frenetic fun of an infamous Fringe Festival cabaret venue.

When the wrecking ball came calling, OOTB could have brought an end to the dream. Some things are worth fighting for, though, and ­ against all odds ­a magnificent old army Drill Hall was purchased in Leith. These dreams, supported by the principles and commitment of many, many people have now carried OOTB into its twentieth glorious year!

Thousands of people now arrive at the OOTB Drill Hall for studios, classes, workshops, projects, events, festivals and to visit the vibrant Café.

It has been a great story, with plenty of mistakes but has nonetheless lead to a place where everyone can be supported to take their own risks and do their own thing. Out of the Blue should now be good for another 20 years! And another.

In 1996, Out of the Blue converted near derelict bus garage offices into an arts centre in New Street, a neglected part of Edinburgh’s Old Town. The OOTB New Street studios provided a workplace for artists and organisations and brought thousands of people to hundreds of live performances and club nights at the Bongo Club.

“In the heart of Edinburgh lies arguably the most diverse multimedia arts centre on the east coast of Scotland”
The Scotsman, Jan ‘98

“And not only has the popular Bongo Club helped provide funds to develop other aspects of the arts centre, it has also played a major role in encouraging the vibrant community spirit that is evident in every aspect of out of the blue“
Third Force News, Dec ’98

…until the wrecking ball came to call…

In 2002, Out of the Blue obtained significant loan finance to enable the purchase of a drill hall in Dalmeny Street, Leith, to develop as an arts centre and resource for people living in the local area. The building is later opened to the public in 2004.

“The studios that have been set up by Out of the Blue on Dalmeny St, have provided a much needed space for artists and entrepreneurs to set up their own businesses. The building is magnificent and Out of the Blue have provided me with the most fantastic workspace I could have ever dreamt of and it’s one that I don’t ever intend on letting go. The people that have set this up and run it are, in my mind, highly valuable to the community.“
Ian Nicholson, Precious Metals Workshop

“There have been many high points which reflect a wide and deep impact of Out of the Blue on Edinburgh’s culture. These include cafe trainees testimonials saying that their lives have been turned around because of the way they were treated at OOTB; watching 100 folk of all ages and backgrounds having a ‘ceilidh’ at Wiff Waff; listening to world class contemporary music in a night­club setting; experiencing the Save the Bongo! campaign when the club’s future was threatened; the Tap Water Awards set up to challenge Nestle’s role in festival comedy; sending a trainee up to receive the Social Enterprise Mark Award.”
John Molleson, OOTB Chairperson

In 2003, The Bongo Club relocated to premises leased from Edinburgh University

“The Bongo Club is a rare and wonderful thing, a club that encourages the best of its local artistic community. …it is a venue that works to promote new and exciting work that attracts visitors and locals alike AND provides genuinely inspiring line ups and shows at properly affordable prices. It has an ethos of experimentation and discovery and accessibility that is unique. It is part of the artistic DNA of Edinburgh”
Mark Thomas, Comedian/writer/broadcaster

In 2006, Out of the Blue established additional workspaces for artists in Portobello.

“To be an artist, you must act like an artist. It’s nothing to do with buying the right paint brushes and everything to do with where you hang out. Step one: find a seat at the Out of the Blue Drill Hall café. Step two: wait for the magic to happen. The intention is to offer places to local unemployed people on the Training scheme, a gesture that reflects Out of the Blue’s commitment not only to artists but to the neighbourhood in general. “
The Herald, May 2007

“It has been amazing. I’m getting up in the morning all excited about coming to my work. I have never worked before and didn’t know what to expect but working in the café is a great experience.”
Jodie, ex trainee and current OOTB Drill Hall café worker

In 2013, the ‘Save the Bongo!’ campaign sent us underground, as The Bongo Club moved for a second time to the four­ storey building beneath Edinburgh Central Library, on the Cowgate (thank you!).

In 2018 Out of the Blue opened studios at Niddrie Mains to meet the increasing demand for studio spaces. The new addition accommodating around 17 artists is located opposite the new library in Craigmillar on Niddrie Mains Road.

In 2015 Out of the Blue opened the Leith Walk Studios which were home to over 20 artists. After they were closed down in 2018, the space was greatly missed.

In April 2018 the Meanwhile Project started off and aims to transform the disused former Tram Depot site at 165A Leith Walk into an ever-evolving, community-run space and bring back a creative space to Leith Walk. In collaboration with The City of Edinburgh Council, Civic Soup and Reiach & Hall Architects Out of the Blue wants to create a vibrant and welcoming social enterprise and creative arts hub that puts community collaboration at the centre of developing plans and offers the perfect place to meet and make friends, eat, have fun and share ideas in a communal space in the heart of Leith.

The local community will have the leading hand in designing the space and approach to this project.

The new Leith Hub will host a variety of individuals and groups with a focus on Gardening and Growing, Food and drink, Sports exercise and play, Arts and education, Social and Small Business Enterprise.

“The business units and street market will create a real buzz on Leith Walk and will address the critical shortage of space for artists and other creative entrepreneurs in Edinburgh. “The community hub will deliver vital services to people in Leith Walk and the wider Leith area, which is one of the most densely populated and fastest growing places in Scotland.”
Cllr. Gavin Barrie, 2018

“It is fantastic to see Out of the Blue receive the support they need to develop Leith Walk Studios and turn the entire area into a hub for the whole community. It is such a great location.”
Ben Macpherson, Edinburgh Northern and Leith MSP, 2018