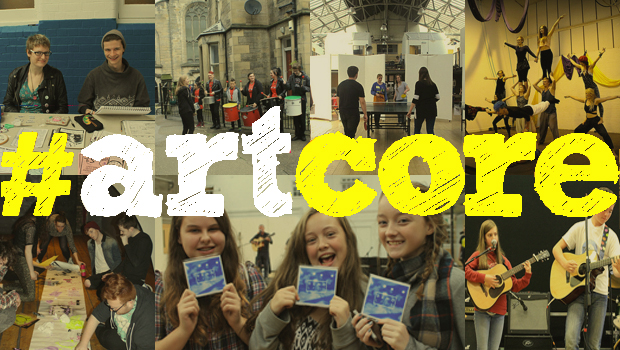 #artcore was a project led by Out of the Blue in collaboration with Edinburgh-based arts organisations, young people, artists and young creative apprentices. The aim was to develop a new and vibrant youth arts scene, one distinct from adult arts, where young people took charge. The project ran from 2014 – 2016.

#artcore was funded as one of nine Scottish youth arts hubs as part of Creative Scotland’s ten year Youth Arts Strategy: Time to Shine. From the start, #artcore sought to position itself as a project that would develop organically, that would change and evolve over time as more young people got involved: a ‘hive’ rather than a ‘hub’.

The team worked across the city with a host of partners to develop an exciting regular programme of youth arts, with activities ranging from music, game design, film-making, creative writing, circus, theatre, scriptwriting, printmaking, publishing, radio production, guerilla art and programming. Over the two years, over 1,500 young people took part.

Among the highlights were;

Edinburgh Youth Music Festival – a month long series of events, working with a range of Edinburgh based youth music organisations, including Totally Sound, Reel Youth Media and Born to Be Wide

Life is a Circus – performance by #artcore circus, developed by Pyroceltica/Full Cirqle

Out of the Blueprint – riso print studio set up providing traineeships, and supported young people’s self publishing prints, comics and zines.

In the autumn of 2016, we undertook a review of the programme and produced a report with recommendation for how the youth arts might be further developed in the city. A summary of the report is available as a PDF document.