Alumni of Out of the Blue

Below is a directory of artists who once resided at an Out of the Blue property and have helped shape our future.

We are an Edinburgh-wide arts project based at Out of the Blue Drill Hall, in the heart of Leith. We offer free opportunities for people aged 13-25 to get involved in arts and we support aspiring artists and performers to develop their talent.

Abigail Smith is an artist interested in how words can affect the way in which we visualise things. Her work concentrates on visual documentation of language.

Working with drawing, film and cameraless photography, Abigail’s work has previously centred around using the basic principles of photography to focus on the relationship between the moving and still image.

Abigail’s recent work is informed by a personal experience of living with anxiety and an interest in the diagnosis of mental illness.

This experience, coupled with extensive research into the historical use of photography and language in psychiatric care, lead her to consider the relationship between text and the photographic image.

UK based African film festival, taking place annually in October and November at Filmhouse Cinema (Edinburgh’s premier independent cinema). The festival is dedicated to screening masterpieces from all over the African continent, accompanied by talks and discussions, filmmakers Q&As and workshops, exhibitions of African art and live performances by African musicians.  We showcase the best of contemporary and classic African cinema to audiences in Scotland, and, on tour, around the UK.

I have graduated from Edinburgh College of Art in 2014, with BA Hons in Jewellery & Silversmithing.
During the studies I got fascinated by the concept of recycling and the use of natural materials in jewellery making, for their durability and natural imperfections. Ever since I have been exloring materials such as reclaimed leather and wood. The shapes I make are inspired by rugged Scottish landscape.

Ailie Cohen is an illustrator, designer, puppet maker, performer and puppetry director, creating emotionally rich and compelling theatrical experiences which highlight the beauty  and surreal in the everyday.

Air Control Pilates combines the fundamentals of the Pilates method with aerial arts. Together they combine to evolve and explore in physical and mindful wellbeing that progressively develops balance, strength and awareness.

Debbie Robbins has been teaching Pilates for over 15 years and started teaching aerial Pilates classes in Edinburgh, Scotland in 2013. Teacher training was launched for Pilates teachers in 2016. Introducing the world of aerial arts to Pilates teachers.

Pilates teachers learn how to creatively use the hammock as a prop, utilising their finely tuned eyes and skills to teach these classes for the benefit of both aerialists and to introduce their Pilates clients into the aerial arts. It’s middle ground for people to come together.

Alchemy Arts initiates and provides socially inclusive and environmentally aware art projects. Our workshops and community projects use recycled resources to transform perceptions of ourselves and our environment through the transformation of materials. We use art, music, storytelling and performance to encourage creativity in a fun and accessible atmosphere.

Alex Mascolo is an Interdisciplinary Researcher, working between the fields of Contemporary Art, Anthropology and Photography. Her research focuses on the subject of Death, specifically, how we can improve experiences of death, dying and bereavement. She is currently a first year PhD student at Edinburgh College of Art, exploring the ways in which food is used to commemorate and connect with the dead. 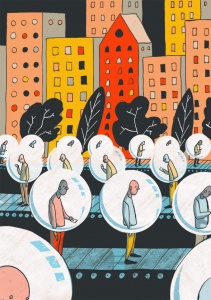 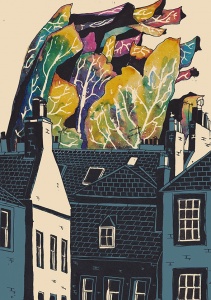 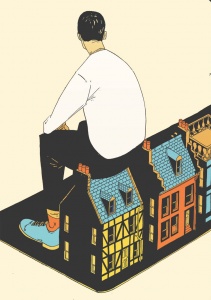 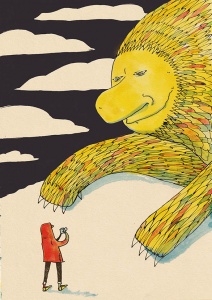 Everyone is shouting louder & fewer folk are listening. It’s time for a new kind of consultancy – which aims to leave people more content than we found them.

Ann’s work expresses her interest in materials and how they behave.  She has had an interest in materials science for many years.  Her current work focusses on the structure, properties and behaviour of materials to create jewellery. She enjoys seeing the transformation of a flat sheet of metal or a length of wire into something beautiful and wearable.

She was thrilled when her Moebius necklace was accepted for Visual Arts Scotland exhibition at the Royal Scottish Academy in 2018.

Fabrics, patterns, sewing and making have always bubbled away on the back burner of my life, and I’ve been a dedicated junk-shop junkie ever since I found my first patent red leather sneakers for just £3. But it wasn’t until I was several years into an unsatisfying admin career that I finally discovered a way to put all my passions in one pot and make a meal out of it! Upholstery is it for me – specifically the chance to turn a tired, shabby, unloved piece of furniture into something which will be a beautiful and useful part of someone’s home.

I aim to restore pieces, old or new, with sensitivity to the individual character as well as the creativity to see their potential. This might involve a simple recover, but more often than not it involves going back to the frame to rebuild the piece from scratch. I have trained with the some of the best upholsterers in Scotland, using both traditional and modern techniques to achieve the best results for the piece in hand.

Anna Liebmann is a professional basketmaker living and working in Portobello, Edinburgh. She teaches extensively in the city and beyond.

Artibrand provides creative and inspirational design solutions to ensure your business gets noticed and gets going! We work closely with you to identify your aims and objectives, your target audience and proposed outcomes. Together we map out a design strategy across relevant media channels to deliver a successful campaign. Artibrand services include brand identity, graphic design, digital marketing, web services, 3d interpretation solutions, animated presentations and illustration. Based in Edinburgh, we have a global approach to developing your brand.

Asta Petkunaite was born in Lithuania in 1984 to a Russian mother and a Lithuanian father, moving to England at the age of 14. Not knowing the language and unable to communicate, painting became her lifeline, which developed into an intense relationship that survives to this day.

For Asta painting is a form of exorcism, an expression of her oblique vision of the world. Her paintings are subjective journeys into the psyche of her subjects, navigating a path through the narrative of life stories.
Each portrait strips away a façade to reveal something more visceral and raw. The works are ultimately moving, hypnotic, unsettling, using a unique aesthetic language.

Asta arrived in Scotland in 2002 as a self-taught painter, but initially trained and worked as a writer. In 2009, she took the decision to focus entirely on her art.

She first exhibited at Edinburgh’s Red Door Gallery in 2006, going on to work with the art collectives GO REBORN and Noir! in 2009. Her work has been showcased in the Capital’s Axolotl Gallery twice in 2010 as well as at numerous Art Fairs across the country. Her first solo show launched successfully at the beginning of this year. Since, she has taken part in three well received exhibitions and has been confirmed for more in the coming months.

Asta has also worked on a number of private commissions and has published a series of greetings cards which are now sold throughout selected stockists in the capital. She lives and paints in her studio on The Shore in Leith.

My inspiration comes from an idea that everyone wants to have something special, or as I call it LOVE-MADE. If people produce only things made with love we would have less recycling and more satisfaction. As wholesale made things have no soul, they can be enjoyable only for couple of days. All items I create are very fashionable as well as unique.

We design and create props, scenery and furniture for the creative, corporate and private markets including: Corporate Events, Parties, Installations, Theatre Shows and Exhibitions.

When you are at your most creative, you are nowhere near your comfort zone. At Big House we work closely with our clients to bridge the gap between creativity and comfort.

At the heart of the Big House is a trusted network of full timers, freelancers and suppliers, each their own specialisms, respected in the industry, who compliment and push each other creatively. We have the skill and flexibility to deliver a product that exceeds the expectations of our clients.